Kaleb is six months old today. As many parents will say, I can’t believe it’s already been six months. Now that half a year has passed since that week at the end of August and Kaleb’s birth on September 1st, I’ve found myself looking back at that time. I admit it’s not hard that period seems as if every detail and moment is etched forever in my memory.

I admit tonight has been a little bit rough. Kaleb has been a little fussy and requiring a few more extra cuddles than usual. While it may be tough with a three year old who also wants his Momma and TJ on his way back from a golf tournament. I find myself while having to keep from getting frustrated also comparing the difference six months can make.

Six months ago Kaleb’s future was very uncertain. Since hearing that we would be having a very small preemie we had no idea what to expect. I feared for my son. My heart was battling conflicting emotions. As they wheeled me into the operating room I kept my hands on my belly not ready to not be pregnant with him anymore. I would never feel his powerful kicks as he grew bigger. I would never have the opportunity to wish for his foot to move from my ribs or feel him get the hiccups. I was not ready for him to have to face the world before it was time, feeling devastated that my body had let him down and I couldn’t keep him safe. On the other hand they couldn’t hurry fast enough. They had determined it was now too dangerous for him to stay in the womb and I wanted them to hurry to get him out of the place that was hurting him.

I remember sitting on the operating table slumped over feeling as if I was carrying the weight of the world on my shoulders while waiting on the spinal block. My doctor walked in and saw me and in his caring manner came over and rubbed my back. The wall that had been carefully placed to keep the tears at bay came down and I no longer could hold them in as he rubbed my back and tried to assure me and tell me it would be okay. I remember telling him through my tears it wasn’t me I was worried about. I knew not far from where I was being prepped was another team, a team that was preparing for their new very tiny patient.

While they performed the cesarean section to deliver Kaleb I could do nothing but stare overhead at the lights as I waited for them to announce his birth. The prayer that I prayed to Kaden each night for the first year or so of his life kept coming to mind. As a new mother I would hold a sleeping Kaden in my arms beside his crib. I would be exhausted and ready for a break but I remember feeling scared and having a hard time finally laying him down. The world is a scary place where one never knows what could happen; SIDS, disease, tragedy, etc. I also knew that each time I put him down the next day he would be one day older, one day closer to no longer being the sleeping baby in my arms wanting mommy cuddles. So I would pray. This was the prayer that came to my mind as I lay on the operating table. I said it for my first son, so I would say it for my second no matter what the future held. “Lord, thank you for this child, your child. If it be your will please allow me another day to be his earthly parent, and with that day help me to remember the honor and responsibility that comes with it. Help me guide him and teach him. And always help me show him your love.” I added on, “I don’t know the future for his life but you do, I dedicate him to you. I know you have a plan for him. Be with me, help me be the mother he needs.” I then awaited the birth of my second son.

I will forever be grateful for two things. One, we still got to hear him cry when he was born. I had never appreciated a cry so much. Second, I was able to see him. I had been told that I more than likely would not get to see him until they took him to the NICU and I had a chance to recover. Kaleb in true Kaleb fashion showed us all by being stable enough that they could bring him around for me to see him. I will forever be grateful for that moment. So tonight I will give Kaleb those extra cuddles and stare at his little hands, his chubby cheeks, and every other feature that makes Kaleb, Kaleb. I will try to memorize and record each of them to memory. I will attempt to catch up on all the cuddles we missed out on the night of his birth and the fourteen weeks that followed in the NICU. I look at him and think of the night of his birth. I was finally wheeled to the NICU after recovering for a time. I braced myself to see him as I knew he would be, hooked up to various monitors and looking so fragile and tiny. I looked at him and grieved for the rest of the pregnancy I lost and the time after labor that we should have had where we would have looked at each other after he was placed on my chest as we begin to bond, studying and learning each other. Instead, I watched him and listened to the machines and monitors. I asked the nurse and was allowed to reach in and I touched his little arm.

Six months ago tonight we may not have known if Kaleb would even have a future. Six months later we are home. Six months ago he was a 2lb 2oz baby with a full head of dark hair. Six months later he is an 11lb baby with an uncontrollable full head of dark hair. He has continuously amazed me with his strength and his attitude. I love our talks. I love our cuddles. I love watching him and Kaden together, seeing Kaden’s unconditional love of his little brother. I am constantly reminded of my prayer the night of his birth. “I don’t know the future for his life but you do, I dedicate him to you. I know you have a plan for him. Be with me, help me be the mother he needs.” Kaleb I still don’t know what your future holds any more than I know Kaden’s or my own, but I do know part of the plan for your life. To teach me. To teach me and show me more about this world and His love than I ever knew. So thank you for these past six months and I look forward to many, many more. 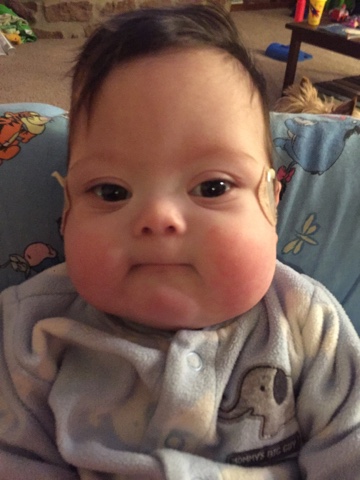 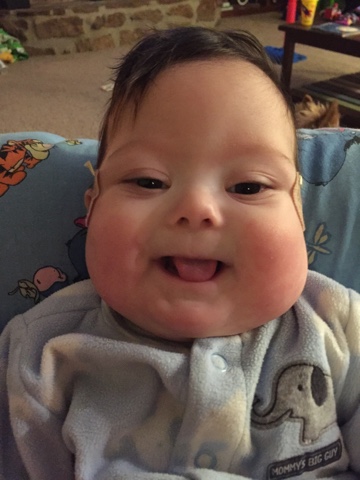