I Know You Are There

April 21, 2018
While K2 teaches me many life lessons that I never would have experienced without his premature birth and several medical diagnoses, it is K1 that really adds to those lessons. Kaden has such a way with words. My five year old who is really like a little old man, has a way of putting into words the way I feel. I see him so clearly articulate his musings and lessons about his life and his world. It strikes me that often, it is pretty spot on for my life. It goes to show that even though I’m a mom and a working professional, that I am in many ways a kid with so much to learn and stumbling along life trying to learn these lessons. (Sometimes it makes me think of the meme that says, "Sometimes I look around for an adult adulting harder than me").It makes me think of something he said the other day. Kaden, like me, has a very active imagination. So like many children, darkness and night can scare him. He was still talking to me as I walked to the door of his room after I tucked him in bed. I stood there as we finished our conversation about darkness and not being so scared. I had already checked his closet for him. Then as I’m leaving he said, “Momma, it’s dark. I couldn’t see you, but I knew you were still there.” Me: “Yea, bud I’m still here.” K1; “Sometimes when I’m trying to fall asleep and get scared I get quiet and I can hear you and I know your there.” ...“But sometimes you wake me up too.”Today on this rainy cool day I am worn out after yesterday’s Mighty Drives for Mighty Lives event for our NICU nonprofit, Mighty Miracles Foundation. But I can’t help but reflect back on the past three years. I had absolutely no idea where my life was heading or what was in store for our family. It makes me think back to the plaque that sits in our home that I got in what was before 2015, the hardest year of our lives, 2011. It says,


“We must be willing to let go of the life we have planned, so as to have the life that is waiting for us.”

Then in 2015 the soundtrack of that season in our lives was Casting Crowns, Just Be Held. The lines in the song would constantly play in my head were,

“You’re world’s not falling apart, it’s falling into place. I’m on the throne stop holding on, and just be held.” (You can read more about a former post on this topic here.)

I fought him. I argued with him that he had it wrong, this wasn’t what should be happening with me and my family. I had to stop and let go and realize that at times it’s dark and I may not take the time to stop and see or hear him in the happenings around me, but He was still there with me every step of the way. He had a plan that I never could have fathomed. I didn’t know anything about NICUs but yet he used Kaleb and the rest of our family to put a passion in my heart to help other NICU families. In doing so I am humbled as I get to hear the stories of other families, and I’m constantly left in awe of their strength. In those times I think, “God, even in the dark you are there.” 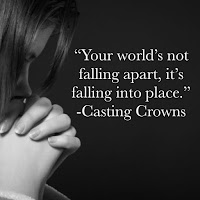 I admit, there are times I still question. Okay, God, we had the NICU, prematurity, and open heart surgery, but why add Down syndrome on top of it? Kaleb has to work so hard sometimes to do things many come naturally to many. He made Kaleb the way he is and as his mother I will work to help him reach his full potential and discover this life God has for him. At times it gets dark, but then again that's life. There is day and night. It is sometimes dark as I see my two and a half year old unable to stand or walk. I don't know when he will reach these skills and can leave me worried how this is affecting his cognitive growth as he's unable to learn new things and discover his world in a way that walking allows.  I will continue to work on saying,


My word for 2018 was discover. My goal was to discover Kaleb, his personality and who he is outside of his medical file. To discover laughter. That its okay to take time to laugh and enjoy life, even when at times it does get dark with worries and concerns about both boys, and when at times it can seem I am hearing a lot of tough stories from NICU parents or my Rockin' Mom friends going through tough times. I don't know what I am going to discover throughout the rest of this year but even when it's dark I know that He is still there.


"Have I not commanded you? Be strong and courageous. Do not be afraid; do not be discouraged, for the Lord your God will be with you wherever you go." -Joshua 1:9

“Thank you Father for writing a life for me that is full of more struggles than I would have ever willingly written in, but is so much more rewarding. Help me, that even in the darkness to always search for you and know you are there.”