December 09, 2015
For three months or to put it another way for 99 days Kaleb has been in the NICU. For those 99 days we have worked to create a new routine, a new sense of normalcy. It was not a normal we were fond of, who wants to drive an hour to be able to get to their child everyday. Somehow though it did become the routine. In that routine which was hard and very physically and emotionally draining there were good things I will take from it. It gave the chance for TJ to have special time with Kaden as he really stepped up and focused on Kaden getting him fed, dressed, bathed, and dropped off/picked up from daycare. TJ was a rock and Kaden was such a trooper knowing that Momma was with Kaleb taking care of him and his "boo boos." The hour drive each way gave me time. Time to grieve and vent my frustrations to God. Time to praise him for this trying time because it meant that there was a baby that was alive and getting the chance to grow. Time to blare music and for a brief time forget about it all.
This routine brought many new faces into my life. People I will never forget and will forever hold a special place in my heart. Far too many to mention by name. Some were other parents who knew the struggle of the NICU. Some were random people who happened upon our path. Kaleb's nurses were technically that, his nurses, but they quickly became friends. They witnessed me at my weakest when I really wasn't sure how much longer we could keep it up. They were there to laugh with me, talk, and celebrate Kaleb's progress. Each and every one I will miss dearly.
Tomorrow I won't know what to do with myself when I don't leave early before Kaden is even awake to make my trek to Saint Francis. I won't drive my same drive and pull in the same parking garage, go up the same elevators to that fifth floor. I won't wash and up in the wash room and walk into room 533 to say good morning to Kaleb. Time goes on. Sometime soon there will be a new baby in room 533. It will no longer be known as Kaleb's room. Another family will sit there rocking their precious little one. New tears will be shed and prayers said as another set of parents occupy room 533. A part of me will always remember those first cuddles as we were introduced to each other and learned about each other in that room. As I held him close and tried not to cry as I watched another wagon ride go by. It's amazing how such a trying time can also bring about so much good. Thank you to our NICU family you mean more to us then you will ever know. Fourteen weeks ago I had a baby. Fourteen weeks later I am taking a baby home.
Then they became a family of four under the same roof. On to the next chapter... 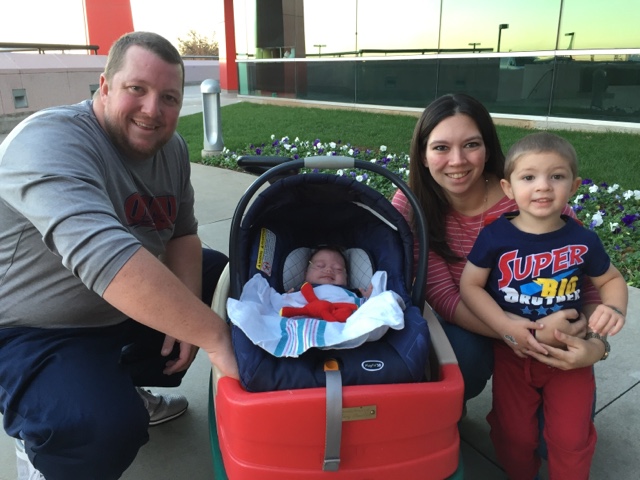