May 18, 2016
People sometimes joke about kids or spouses saying I guess I'll keep them, there is no returning them now or the return time has expired. What if they weren't true, what if we could go back in time and decide a different path. Would we still make the same decisions?
If I could turn back time to that day nine years ago as I walked down the aisle on my fathers arm would I still stroll to the front of the church ready to pledge my life and love to you? Sure we were two young kids in love but really we had no idea what life would bring. Within the past nine years we have dealt with loss of job, foreclosure, and miscarriages. We have faced personal and professional disappointments, changed plans, and lost dreams. Not to mention this past year a very premature birth, extended NICU stay, diagnosis of Down syndrome, and heart surgery. Over the past nine years at times I'm sure one or both of us has wanted out. With all of that people would might wonder why in the world if given the chance would we ever make that same choice.
But to undo all of that would also be to undo a million laughs, shared dreams, conquered battles, and shared battle scars. It would be to erase our life's best achievements of Kaden and Kaleb. It would be to take away our home which yes, shows the signs of unfinished projects, but it's ours. It would be the undo all of the crazy arguments that really most of the time are trivial and we laugh about later. It would be to lose each other's family that have become as much a part of us as the family we were born into. It would be to miss out on games of rock, paper, scissors to see who is going to have to wipe a butt or change a dirty diaper. It would be to lose out on something closer than even the term best friend can begin to cover.
We could have done without all of the hurt, pain, and chaos that this world can cause but to do would change our story. For each twist is our story, and one we get to write together. Nine years ago today we had no idea what that story entailed.
I think about what is engraved inside the band of your wedding ring. Even now. I got the idea from a Karen Kingsbury book. It serves as a reminder that even now I love you. Even now after nine years of life I love you, I choose you.
So yes if I could go back in time I would still make that journey down the aisle. Once there I would perhaps hold onto your hands just a little bit tighter, I would stare into yours eyes as I picture our future, antsy to begin the life which is about to be ours and fervently say, "I do." 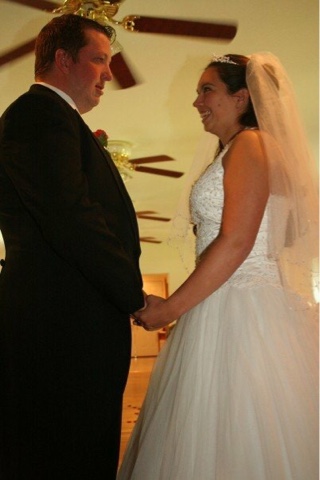